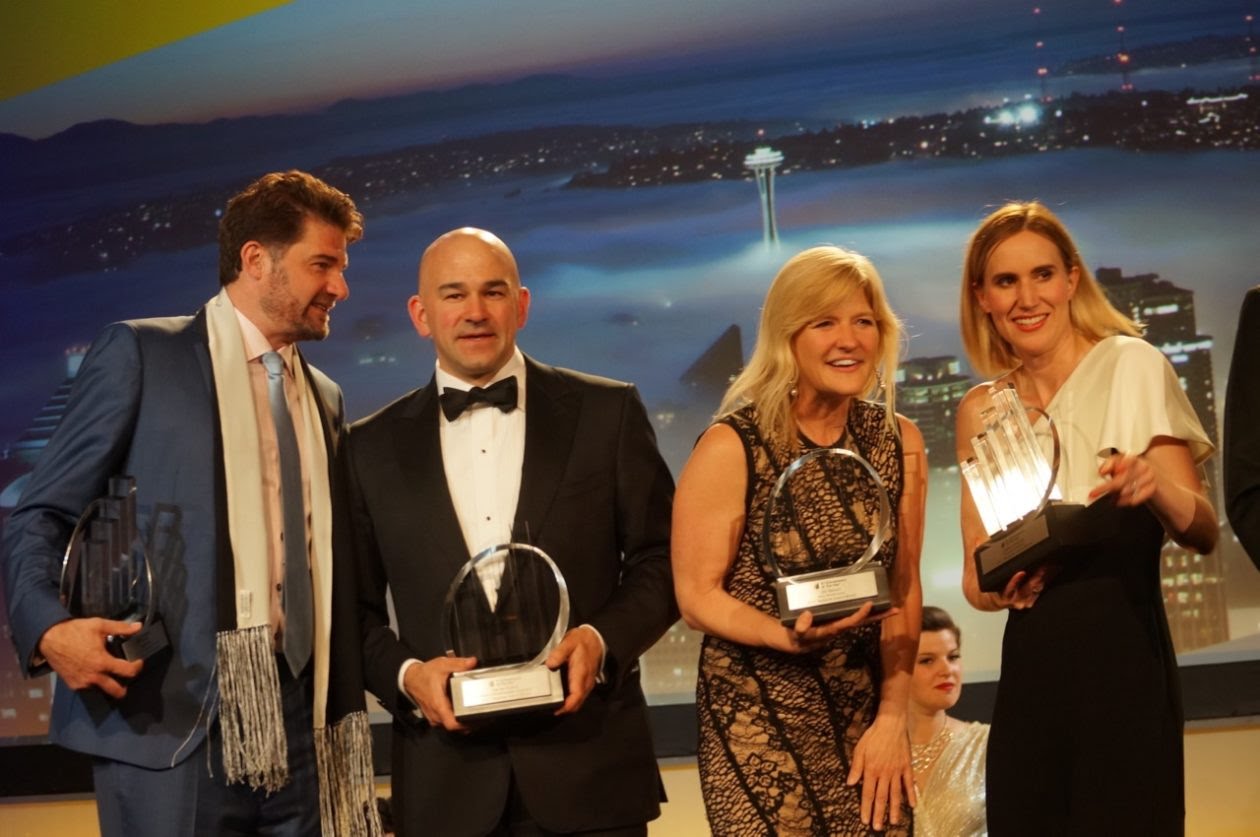 Chad and Harlan Robins of Adaptive Biotechnologies, Jill Nelson of Ruby Receptionists, and Jaime Schmidt of Schmidt’s Naturals were among the winners at EY’s Entrepreneur of the Year Awards. (GeekWire Photo / Chelsey Ballarte)

Sibling collaborations and long-term tech bets were just a couple of the storylines at EY’s Entrepreneur of the Year Awards ceremony in Bellevue, Wash., Friday night — recognizing winners across seven categories in the Pacific Northwest regional finals of the national business competition.

Seattle-based RFID technology company Impinj won the technology category, as CEO Chris Diorio recounted the company’s 16-year journey to its IPO last year. “Today it’s a beginning of us realizing our vision of connecting every item in the everyday world to the Internet,” he said.

Meanwhile, two of the other winners were teams of brothers: Rick and David Cantu of systems integrator and cloud services company Redapt of Redmond, Wash., and Chad and Harlan Robins of Seattle’s cancer-fighting Adaptive Biotechnologies in the life sciences category.

“First of all, I feel like a member of the lucky sperm club. I’ve been asking my brother for 20 years to invent something that I could commercialize,” joked Adaptive CEO Chad Robins about his brother, Harlan Robins.

The winners now go on to compete at the national Entrepreneur of the Year Awards. Nine of the finalists are based in the city of Seattle, and six in the Seattle region, while six were from Portland. Here’s the full list of finalists. Continue reading below for video clips and more pictures from the evening.

The article can be found here.

HOUSTON, TEXAS – May 14, 2020 – Liongard, a software company that provides a unified automation platform to managed service providers (MSPs), today announced the close of $17 million in…

Congrats to Amanda Lannert, CEO of @Jellyvision, for being the ITA CEO of the Year! ow.ly/6XjD30lR6W8

Congrats to Ruby Receptionists for making the 2018 List of PEOPLE's 50 Companies That Care! @callruby ow.ly/xKDD30ldCsp

@LendKey is Awarded Recognition as a Great Place to Work® by Fortune ow.ly/MOaB30khXlS

Netwrix has been shortlisted in the Best Database Security Solution category at the 2018 #SCAwards for the third ye… twitter.com/i/web/status/9…

@BRIDGEEnergyGrp Appoints Dr. Ray Gogel to Board of Directors ow.ly/wO0T30hA1SM